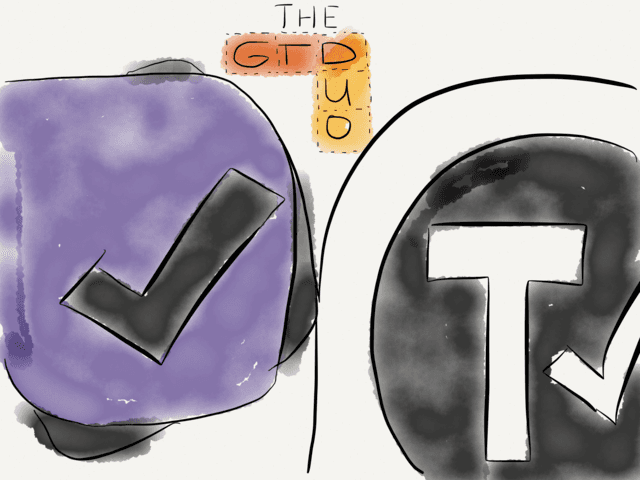 I haven’t heard much about GeekTool lately. The same could be said about my blog. So it’s time to do something about (both of) it.1

Today I’ll write about how I keep track of my tasks. My first post on RocketINK was about OmniFocus. It is the backbone and main brain of how I manage everything. But to be honest, I still get overrun by it on a regular basis and I have been guilty of neglecting it completely for a few weeks many a times.2

While I’m still working at figuring out what my ideal setup is and more important if there ever will be one, I have found a way - outside of OmniFocus - to deal with tasks that need to be dealt with. I’ll come to this later. First, here’s what goes into my OmniFocus – in short: I keep every actionable task in OmniFocus. Admitted, I pause a lot of projects and some are stalled for over a year now. I still want to keep these tasks inside the application since I use OmniFocus as my personal library of things I want to do. Even if this means that I clutter my OmniFocus database with projects and tasks that are not of an immediate importance. I’m open abou it, there are definitely projects which I won’t be able to tackle for the next 5 years. For me it’s good to know that I’ve written my ideas and possible actions down and to have a fixed place where I can look them up when I finally have the time to do them. This gives me a certain peace of mind and I don’t have to live in fear of forgetting any of my possible flashes of wit.

I maintain my OmniFocus library to a certain degree but I don’t do it as often as I should. Don’t get me wrong. I keep it in shape so that it I’m still able to rely on it to keep me aware of everything that is due (I love those little notifications on iOS – that’s what makes OmniFocus bulletproof for me). But then again, since there is so much else inside of the database, it’s a bit of lumpy and has a far-from-optimized feel to it. Despite of having perspectives that help me to deal with the overload of tasks I’ve gathered, I get overwhelmed frequently. But I’ve also found shelter outside of the OmniFocus ecosystem: in the arms of TaskPaper.

What helped me tremendously - especially in those days or weeks were I don’t open OmniFocus - is to have some TaskPaper files of ongoing projects. Even when things go pear shaped or you’re suddenly in panic mode and see the right lights blinking, you know what do to next without a full-fledged task management system. In the last month, times were rough for my family and I wanted to be there for them. I wrote a short list what I need to bring with me and off I was in my car driving 500 miles. What it comes down to is this: deep down you know what really important is and in the worst case you could survive with pen and paper when it comes to task management.

For my daily life I choose to narrow it down to these four areas for which I created TaskPaper files:

I have a couple more TaskPapers - notably lists that I migrated from OmniFocus to maintain them in nvALT or Simplenote/Listary - but the ones in the table above are the ones that I put right on my Desktop with the help of GeekTool. I frequently take a glance at them with the default OS X shortcut “Show Desktop”.

I guess a good part of my problem when opening OmniFocus is, that there’s a plethora of tasks which are paused and undone. This subconsciously affects my self-esteem, leaving me with a feeling that I haven’t accomplished that much. Since I use the app as a library and the amount of ‘unfinished work’ stands in no relation to the tasks I checked off, my mini TaskPaper projects are more rewarding to me. It might just be a simple psychological trick, but it works for me (a bit better than just relying solely on OmniFocus). That also justifies the amount of hand work that is needed to populate the TaskPaper files with tasks that are already in OmniFocus. On the positive side, I get to check off completed tasks twice (how awesome is that… be quick about it and your brain might won’t recognize that you basically just checked off the same task).3

In addition to these files I also use some of Rob Trew’s4 scripts from the custom OmniFocus action lists on the desktop, using Geektool thread in the Omni Group Forums. At the moment there are some overlaps since Rob’s scripts show me my flagged tasks, the due soon or in last fortnight tasks, my obligations single-action list and my study folder.

I was tempted to dig into how to add some color to Rob’s scripts (= quite difficult task for me), but then I’d miss out on the positive side effects which TaskPaper brought to the table. 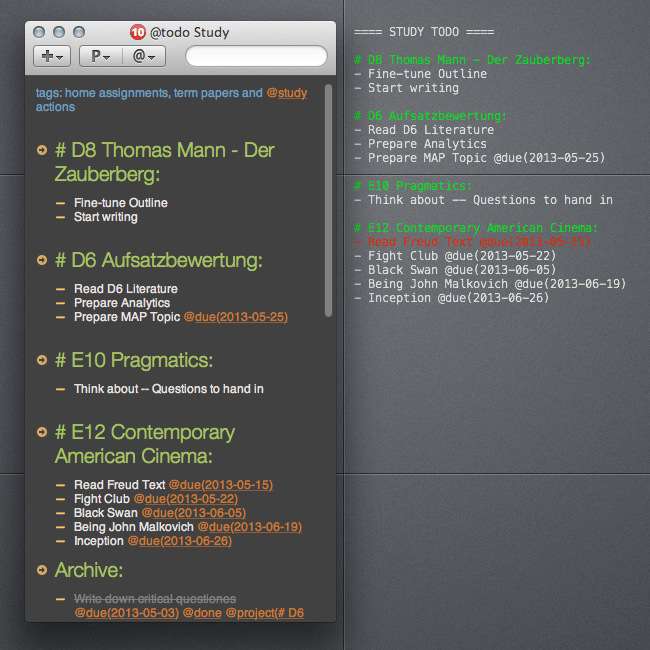 Here’s the script for my TaskPaper files:

What it does is:

What’s left to do

I’m excited about FoldingText. At the moment I’m not willing to give up on TaskPaper because I like that it’s more concise with a narrow focus, but FoldingText is the quasi successor and it’s a great app which has a lot of potential.

I’m also curious about how fast entering dates in OmniFocus 2 will be when I use it on a regular basis. I dropped the beta for now because some features I depend on were missing.5