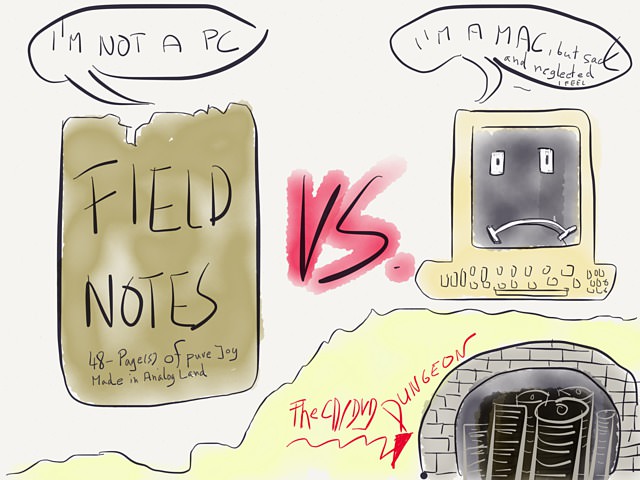 Let me start out by giving you the bigger picture. The last time I extensively used pen and paper was in high school; then again I had a brief pen and paper phase between 2003-2005. I only used analog tools when there was no other chance to gather the content in front of me.

I ditched CD’s in 2004. On the same line, I got rid of DVD’s in 2006. Every CD and DVD I own is filed away into several boxes which collect dust in the cellar. I started early with the exodus and soon realized that I don’t like round shiny discs anymore. I don’t even want to see them.

The only hard (read: physical) thing for me to part with were books. So I didn’t. There is something ancient about books. I get sentimental and easily attached to those worn out old things, so I keep them close and let them live in their habitat (= a bookshelf) in our living room.

With all of the above said/confessed/written down, I have one more thing to get off my chest: I didn’t enjoy writing with pen and paper. It always felt slow und unnecessary to me. I asked myself every time I jot something down: what’s the point? I’m going to digitalize those squiggly lines anyway. More sooner, than later.

Well… that stanza above is the old-me talking. And this article will tell you why new-me thinks it was time for a change and why the person typing these letters now is glad about it.

To be frank, this is still preamble stuff. But anyway…. For the longest time I was unhappy with my GTD setup. If you followed this blog you probably know that I quit OmniFocus for a whole year in favor of a TaskPaper/FoldingText combo.

With the release of OmniFocus 2 I ended up using it again. One more time it was the trustworthy combination of TaskPaper and OmniFocus that kept me rolling.

What I took away from quitting OmniFocus is that my large running lists have absolutely no place inside my main task manager. OmniFocus serves as a centralized brain for only the most important things. So I grabbed a shovel and everything else was moved out if it (into plain-text lists). I ditched contexts almost completely since they were of no use to me and needed constant maintenance, c.f. when filing tasks from the inbox.

I’m glad to report that the app is now usable again for me but still it is by no means the ideal solution for a fully functional workflow… there’s too much I don’t need on the one side and too much friction on the other.

While I’m waiting for the perfect Task Manager1 - a thing that I’m used to - there is still something missing. Something to fill the void….

What I experienced might be familiar to any nerd. Like stated above, I ditched everything analog a decade ago. I love maxing out the possibilities of the digital age, but sometimes it can be truly counter-productive. I got too detached from my tasks, like they belonged to someone else whose computer I happen to manage and organize.

Every day I picked the urgent tasks and moved them to my today.taskpaper file, then I added some fun stuff from my running lists to keep me busy. Most times I threw in some extra tasks in the ‘tomorrow’ section of my file to sustain the feeling of being organized. At some point I had to clean up the whole mess and start from scratch with the today file.

Too often tasks felt just like zeros and ones I shuffled from one place to another. That was the point when the last drop of joy got sucked out of them.

So, two months ago I went shopping and bought a handful of notebooks and a great pen. I started working analog… with all the drawbacks and benefits.

To say the least, starting to hold a pen again and letting it freely march its destined path felt odd and refreshing at the same time. 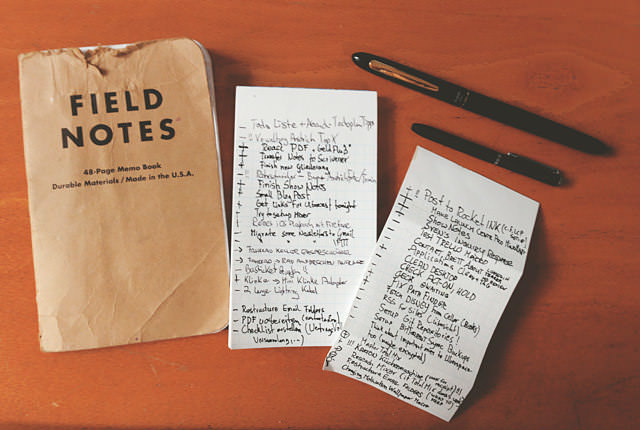 Writing with pen and paper helps me to remember things that need to get done better. This way I deal with my important tasks several times, using different methods under changing conditions. It’s the equivalent of having a good backup - the 3-2-1 backup rule - only that I backup to my brain.

The other way around is now equally likely. Inspiration strikes in the middle of the metro and instead of turning on my iPhone I pull out my notebook and write down my thoughts. Later on I add the digital equivalent to my Mac.

Being new to paper, I follow the practice of giving every day its dedicated page. So I’ll have to write down some tasks twice or more. Past me would have been annoyed but now it’s okay with me. Matter of fact it trains my mind and the scatterbrain gets more exercise.

The way I used to think in former times of writing down and remembering tasks was that I don’t have to care about it because a robot is managing these things for me. I considered writing things down physically is the same thing as “stealing away limited space” of my minds RAM. But no, it isn’t. It’s exactly the opposite. I train the ol’ thinker and he can remember more than before.

Forget what you need to do. With confidence.

This sentence loosed its impact on me. There are still tons of stuff in my task manager that I don’t know of and that I’m thankful of being reminded for, but the lesson for me was that I don’t have to completely give up the steering way and leave everything to the auto-pilot. Sometimes it’s nice to let the chauffeur take a day off and drive to town by yourself.

Lastly, writing with a pen more often has helped my RSI a bit.

Well, people told me this for ages and I didn’t believe them since they were using old technology, but checking off a task by hand is a game changer. It’s just super satisfying. Since I can take a peek at my old lists and occasionally browse through them in my notebook, I also get some mental shoulder padding. I never did visit the completed projects perspective in OmniFocus. But seeing checkmarks right in front of me and knowing what I did achieve the last week is deeply satisfying from time to time.

In addition, when in a conversation with someone where I have to take notes I don’t feel like a total ass who doesn’t pay attention anymore. For centuries people made notes while listening to others. No one bothered. I think this has some kind of semi-primal roots. But, when we use that glowing thing where all the Facebook and Twitter is happening on, whilst in mid-conversation, just to write down a sentence, it still feels rude to others. My best guess is that this feeling won’t simply shake of in a couple of years.

I bought a good pile of paper, so to speak. Here are the gadgets that convinced me. I’m still in the experimentational phase, so thinks might change and I’ll update you if I find something nice. 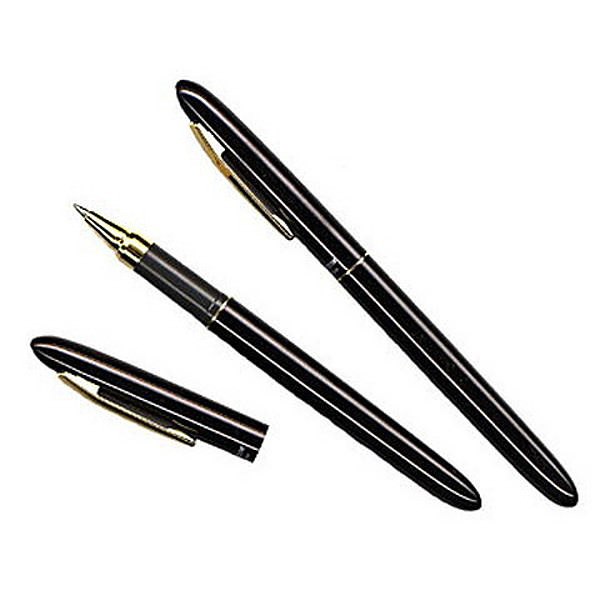 This refillable ball pen looks elegant… and not too cheap. That’s good because naturally I like to own ‘nice things’. It’s also slim, which is a new thing for me. I used to prefer thick and big (normal) ball pens.

The best feature of this pen: it comes with 0.7 mm ceramic point roller – japanese style, I’m in awe and ❤ the shit out of it.

With approximately $30 it’s also not too devastating if I loose it.

I wasn’t able to find a US store to link to for the Words pen. Feel free to contact RollerPen.org, they might have some ceramic roller ball pens from Otho for you in stock. If you’re interested I think it’s worth a shot.

I also got a small backup pen in case things go pear shaped. It’s so tiny that I can’t hold it comfortably… but that’s okay since it’s just my fallback/emergency pen. 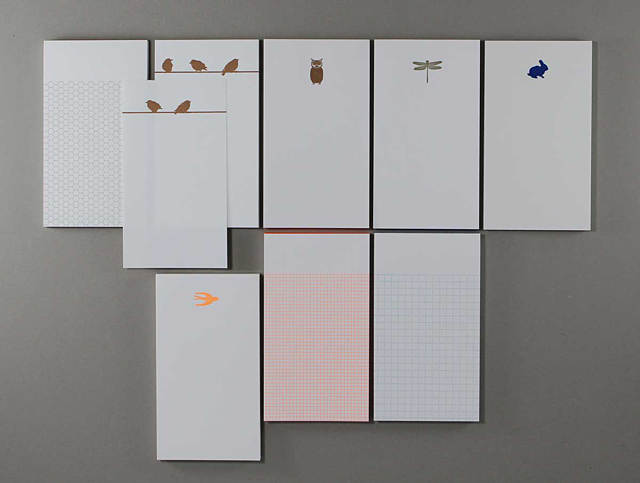 These little blocks are handmade in Brussels and they serve as my today or project checklist.

The thickness of the paper is great. Most times I use the top field to write down the date and project name – I guess that’s why they are there. I don’t do this every time.

When you hit the website you’ll see that they come with different layouts for all tastes. I’ve never been a “line guy” but the notebook below converted me, so I’m considering trying a mini-bloc with lined paper next time. 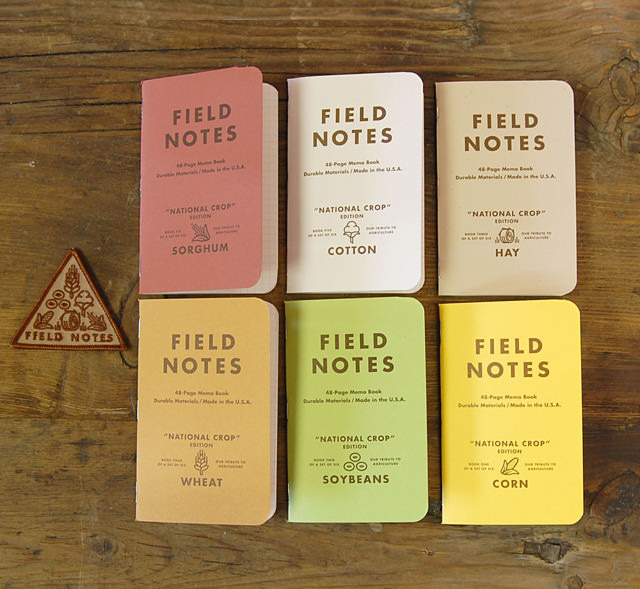 As you can see in the image on chapter 2 my Field Notes book is always with me. That thing is worn out, wrinkled-up, and just looks like it’s lived up to it’s potential… I also like my books this way.

As a notebook rookie I bought several thick checkered notebooks. I soon learned that a slim 48-page memo book with fewer pages is much more versatile. I can always fit it in my back pocket and even use dedicated notebooks for home and work projects despite having one as a kind of all-purpose-always-with-me inbox.

To my surprise lines also work better with me than the checkered ones I used to prefer. But I already told you this in the laster chapter and instead of deleting one or the other I torture your eyes with another sentence. ಠ_ರೃ (<= evil master mind) 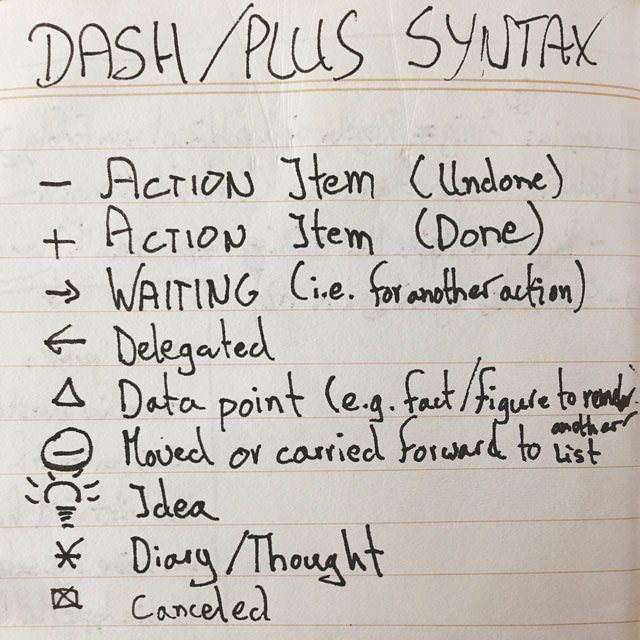 Patrick Rhone’s Dash-Plus is how I roll. I can’t help it. It always had a certain appeal to me. I wanted to use the iPhone app despite having no use for it since it was a completely other system and had no Dropbox sync.

Now, finally, I can use the heck out of it. I didn’t hesitate an instance to switch to this system. I’m sure I will add more use cases to the standard syntax over time. By the way, if you use Dash-Plus and have a cool syntax… ==> “please do tell” and contact me on Twitter or let me know in the comments about it.

That’s it. A short story from a recent paper convert.