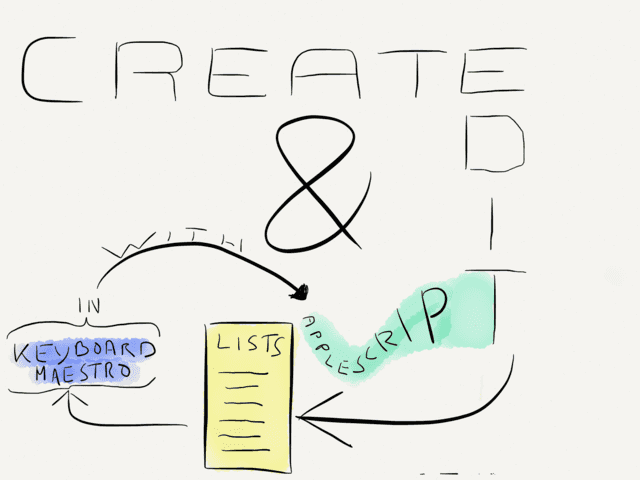 The plethora of features and the custom hacks that can be created with Keyboard Maestro are the reason it has earned a place in the top 5 of my favorite Mac apps. Still, there is room for improvements. Today I want to address one feature that already exists, but which isn’t usable for me: lists in a dialog prompt.

In this post I’ll cover the status quo of support for lists in Keyboard Maestro and two workarounds for different scenarios where lists can come in handy. To wrap it up, the last section shows you my present setup of how I create new notes and append notes to lists, as well as how I use a piece of AppleScript to generate a list of recently modified files which prompts me to choose one document along with several other options.

But first things first. Terminology. The following picture illustrates what I refer to when I speak of ‘lists’ in this context: 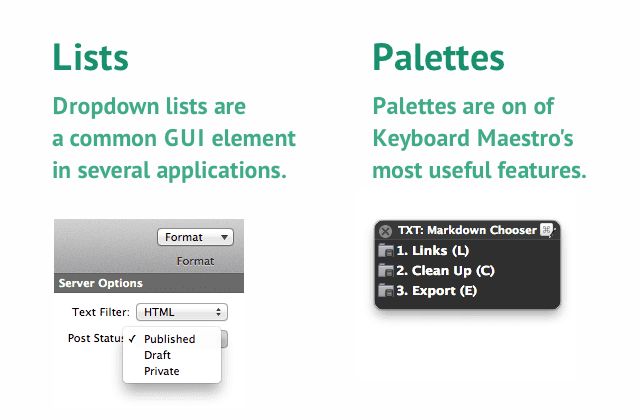 In Keyboard Maestro you can create simpler versions of these traditional GUI element, too. Although they won’t look and act exactly like the one from the screen shot I took (it’s MarsEdit by the way) they are useful in certain contexts. Before we dive in deeper, here’s a comparison of the key features of both, lists and palettes, with the latter being my favorite for replacing ‘dialog lists’ most times.

Lists are good for…

Palettes are good for…

Keyboard Maestro 6 brought some new features which many users (including me) have been waiting for. Above all, I enjoy having the ability to trigger macro palettes with a macro which makes my previous workaround obsolete. The new text tokens are also a nice addition.

To give you an example of how useful and versatile lists are, here’s an example by Gabe from Macdrifter where he makes use of them with his Quick Note macro: 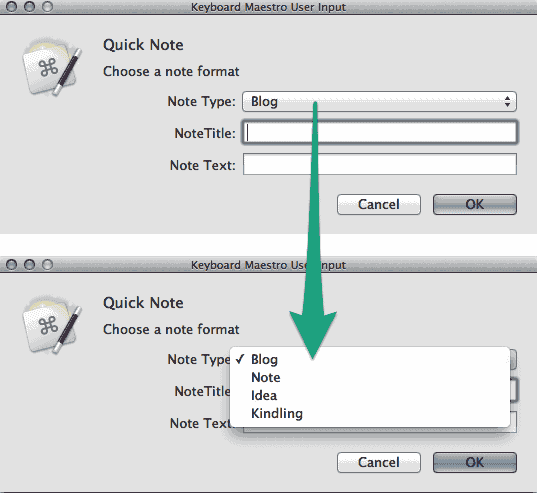 These lists can be created in Keyboard Maestro by making use of the | character aka pipe to create multiple values. It’s a good option, especially for users who use their mouse more than the keyboard.

Your sharp eyes might still stuck on that last remark…. Right, that’s exactly the problem I have with Keyboard Maestro’s implementation of this somewhat hidden feature. You can’t navigate such a list with your keyboard which leads to me not using native Keyboard Maestro lists at all. The point of the whole exercise for me is not to leave my keyboard and gain a swift way to choose from an array of list items. At the moment Keyboard Maestro forces you to pick the entry via the mouse, there just is no other way.

The fill-in snippet of TextExpander gives you multiple choices in a popup menu which makes it in some cases a quite useful replacement.

I make use of the double space suffix technique by Kaushik Gopal which I find brillant and more logical than the usual approach with a period or semicolon prefix, so here’s my kao SPACE SPACE snippet for a list of my beloved Kaomoji Emoticons:1 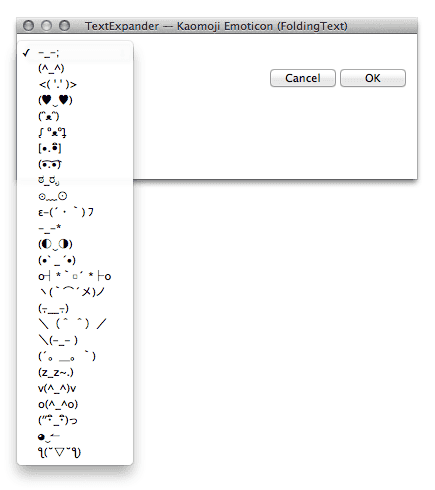 Since I’m deeply in love with Keyboard Maestro and want to preserve the just fallen in love kind of feeling in our relationship for as long as possible, I created a one-action macro to trigger the TextExpander snippet:

What I gain from this ménage à trois is that I can put the macro in a palette or trigger it via a hot key.

However, when using TextExpander you can’t pass the output of a list item into a variable and make use of it anywhere else in the macro. After all it’s TextExpander and it does best what it’s build for. Use it for that purpose. If you want more advanced lists read on.

As simple as it is, the TextExpander example above represents a use case scenario where lists make more sense to me than using Keyboard Maestro palettes. Now, to make lists even more useful we can use AppleScript and build a list.

As you can see, the output can be reused, which is always a good thing. Here’s the rest which shows you how the AppleScript is embedded in a simple macro: 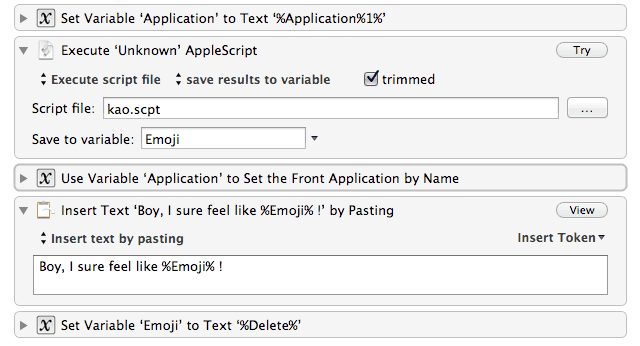 Aside from Gabe’s Quick Note macro there’s also Federico Viticci’s recently released macro for Automating Mail Signatures and Senders with AppleScript and Keyboard Maestro. His post provided the initial spark to write this article since I forgot about this feature which I so deliberately abandoned from my workflow until now.

Emoticons are great and all, but they usually don’t count towards having anything to do with productivity. So, here’s a more useful example for Apple Mail users. I checked with Federico and he allowed me to tinker with his AppleScript. 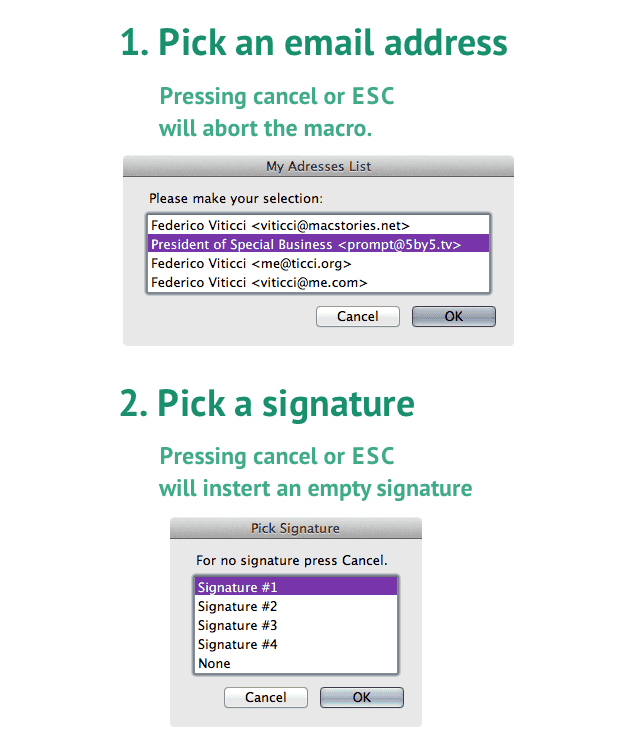 Like outlined above, the advantage is that you can navigate the list with the arrow keys and even type the first one or two letters to jump directly to an entry. For instance if I want to repsond via my zapp@brannigan.com address I just need to press z and the entry gets selected.

Here’s the AppleScript to set this up:

5. The Combined Power Of Palettes And Lists

Since lists and palettes are only two different ways with the same goal in mind, it’s obvious to combine them to get automation done more efficiently.

I just have started with using lists after Federico’s post and right now I only have one bigger use case with which I’ll also end this post.

5.1 Prelude - My setup for managing notes and lists

Before I go into detail on the palettes and lists in my repertoire, let me give you a brief introduction on what I use on the Mac and what apps I prefer on iOS. It’s just a short description to give you a better idea of why I choose the macros in the upcoming sections and an why this works for me.

nvALT is my database for almost every Markdown or plain text file on my Mac. My notes folder lives in Dropbox which is my favorite way of syncing my documents to iOS while still having easy access to them on the Mac. iCloud has never worked for me, it’s just not my kind of sync. I can’t stand the idea of data I frequently access being tucked away in the depths of OS X. Keeping my notes on my NAS would also be a good solution. Sadly there are close to zero iOS text editors with support for WebDAV – Brett Terpstra’s iTextEditors lists only 6 editors which support this feature at the moment.

There are a lot of editors I have installed (and use) on my Mac, but the point here is not to list and praise them all here, it’s rather highlighting the fact that having my notes in one location makes it easy for me to find and edit them.

I have three types of plain text files in my notes folder which serve different purposes:

On iOS my main editor is Notesy – it’s my nvALT for the iPhone/iPad. In addition I manage my lists with the relatively young Listacular which has recently replaced Listary for me.2

Listacular does a splendid job at managing lists. It reads two file formats (.txt and .taskpaper) and has basic Markdown support. Its trick is that it differentiates between the various Markdown list markers. By using an asterisks your list stays a list, when pre-appending a hyphen you get a todo list with checkboxes.

This works for me because my (running) lists all have a .txt extension. The good thing with this approach is that I only see what I want to see on Listacular: lists.

There are some repetitive patterns in my workflow. One of them is creating new notes and lists, the other is adding to my already existing lists. The notes palette (⌘Page Down) aims to be my starting point for any of those actions. It’s a work in progress and I’m not sure wether I keep all of the macros, remove some or even add more to it from my global palette (^Space) like ‘create a new email’.

The structure of the palette: 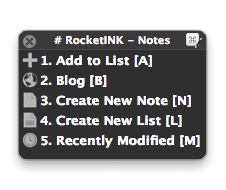 Credit: all icons used in the macros are made by Alex Shutin from The Working Group.

Since all of the 4 macros basically perform the same action, I will only cover the first one here (which also happens to be the longest macro out of those four).

(1) After starting the macro, a list pops up and I can pick which list to add something to. The script is structured just like in the example at 4.1 with the kaomoji emoticons. 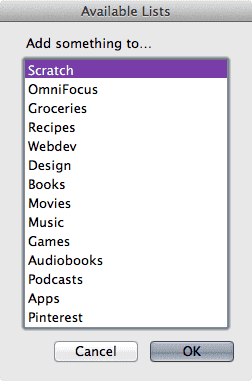 (2) Next there’s a prompt where I enter my list items. Remember, you can always create multiline notes by adding a line-break with ⌥↩ – don’t worry about Keyboard Maestro only displaying one line.

(3) What follows are all the if conditions for the various lists:

(4) Play a sound, send a notification and delete all variables. √

A visual representation of the macro:

UPDATE: I added an easier to maintain version here. 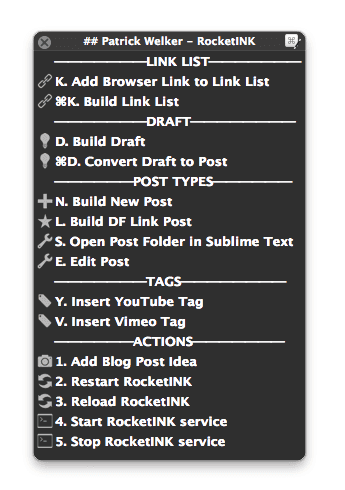 I just added this for the sake of giving you the overall picture of the setup. Going into details would go beyond the scope of this post.

One last note, the “Edit Post” macro makes use of the AppleScript which I’ll introduce in section 5.2.4. Often times I need to correct some spelling mistakes and that’s where this macro jumps to the rescue. It opens up a list with all my posts and syncs them to my Jekyll blog after I’ve finished updating them.

To be frank: I’m not too fond of these. They are a mix between the add to list macro from 5.2.1 and the recently modified macro in 5.2.4. These macros started as a proof of concept and gradually evolved into something bigger.

Both macros (i) create a new text file (note = .md, list = .txt), (ii) prompt you for a name, (iii) open up the note in the editor you choose from a list, (iv) ask you if you’d like a preview in Marked and if you answer with yes (v) the two windows get aligned filling one half of the screen each. Admitted, this is pointless when you start with a blank canvas, that’s why…

This AppleScript is the secret star of this blog post and also resembles my 1st serious go at doing something with Apple’s scripting language. The aim was to make it versatile, useful and something that people could in fact integrated in their note taking or reviewing workflow.

In a normal week I drop several notes into nvALT. It often happens that those files are somehow project related and that I keep coming back to the same documents within said week just to edit them. That’s where this script can come in handy. It prompts you for several steps: 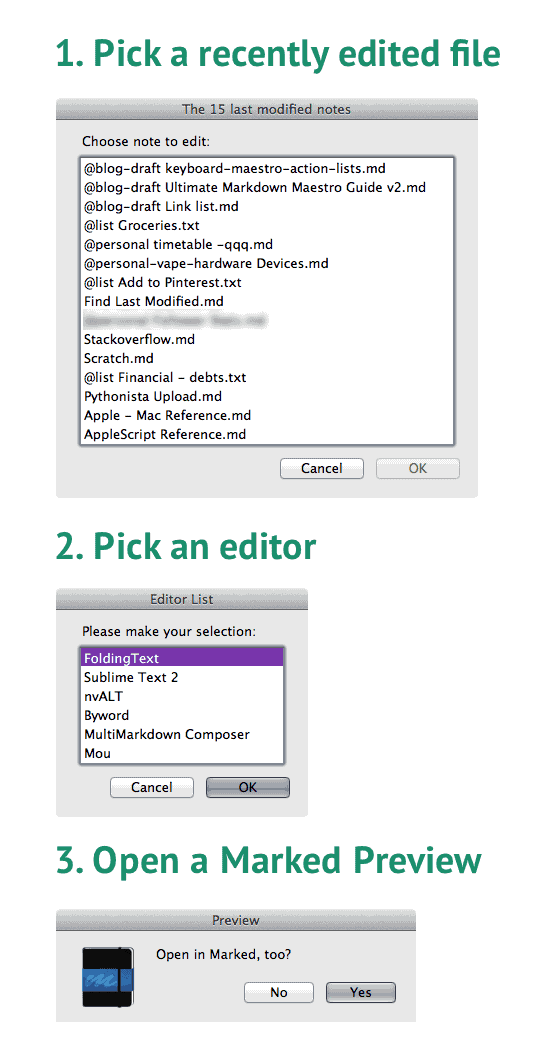 Most parts are customizable. You can optionally turn on Marked to always open up, same goes for the window aligning (which I borrowed from Rob Trew) and some other options. Take a look at the user configuration part of the script where I also explain briefly how to set it up and where the known problems are at.3

Side note: I had problems embedding this script, so here’s a link to the Gist for now.

Versions of the script I use

At present I run several trimmed down versions of this script. They are shortened because I don’t want to get prompted all the time and want a specific behavior for certain actions. If you find the script useful, I’d advise you to just edit the file to your liking. Here are my iterations:

Other possible use cases

Note: If your not into the script but use nvALT then add this nvalt://find/* to your LaunchBar or this nvalt://find/{query} to your Alfred searches. … I had to mention it because I’m not sure every nvALT’ler knows about the URL scheme. I use it all the time.